The Beginner’s Guide to Virtual Reality

What Entrepreneurs Need to Know

The virtual reality industry and tech press have been sending entrepreneurs mixed messages. On one hand, there’s a lot of buzz — one 2017 prediction estimated the VR market would be worth $25 billion by 2021, with another $83 billion funneling into augmented reality.

There’s been money pouring in, leading to a proliferation of devices across multiple consumer price points. Smartphone owners can get a basic VR viewer for practically nothing, get a decent headset and controller for less than $100, or upgrade at a range of price points, making VR accessible to both luxury and mass market consumers. There was a corresponding forecast of rapid growth — an estimated 171 million virtual reality users by 2018. Meanwhile, virtual reality app downloads have been increasing geometrically, with 276% growth in 2016 alone.

But there have also been warning signs that the hype has been somewhat overblown — especially for high end virtual reality headsets. HTC and Oculus have now entered a price war, with analysts estimating each company has sold less than 500,000 units total. Sony, which entered the market at a lower price, moved 915,000 PlayStation VR headsets in its first four months, only to have sales slow to around one tenth the speed, hitting 1 million 4 months later.

So, is VR poised to explode or fizzle out? Well, neither, exactly. TechCrunch has successfully zeroed in on the problem:

“Once again, hype has been allowed to lead — and first movers who shelled out to play in nascent virtual spaces are left feeling burnt or bummed.”

The tech world did what it always does: it got really, really excited about a new (err… in some sense new) technology. And when that technology didn’t change everything all at once, people got frustrated. That’s just what happens with most new tech. The good news is, that means a lot less for tech entrepreneurs than it does for tech evangelists.

The Next Phase of Virtual Reality

Let’s get some badly needed perspective. We’re not yet entering a world where VR becomes the standard way of engaging with technology, but that was never really in the cards, was it? The fact is, virtual reality use is still trending upwards. Headsets are still selling, virtual reality apps are still being downloaded, new users are still curious and ready to try their first app. VR won’t be as big a market as traditional apps in the near future, but it’s still a profitable climate for innovative entrepreneurs.

In fact, startups and smaller companies may be what takes VR to the next level. Virtual reality apps are still fairly niche, which means big companies with a lot of overhead are mostly focusing on traditional games and apps where they can recoup their costs. This leaves VR users with a relative dearth of software, which creates huge opportunities for entrepreneurs.

Investors are taking note, and pouring money into pioneering, VR-focused outfits. Survios, a company that grew out of a VR research and development collaboration by three University of Southern California students in 2012, recently raised a $50 million round of funding, becoming the best funded studio working purely in VR development. For other gaming companies, apps that support both virtual reality headsets and conventional interfaces have allowed them to appeal to a larger market, while harnessing the energy of early adopters.

Interestingly, Survios met Oculus founder Palmer Luckey at the USC Mixed Reality Lab, and even ended up using one of his early prototypes in their work. Working at the beginning of the new wave of VR excitement and innovations, they faced different challenges and opportunities than VR entrepreneurs face today, but there are parallels.

When they started, the tech was available, but not quite as assembled or ironed out into a usable, commercial product. Oculus was able to use off-the-shelf parts to assemble innovative virtual reality headsets, while Survios drew on consumer technology like the PlayStation Move and Microsoft Kinect to create a more immersive experience than what was currently available.

Independent entrepreneurs have another chance to get ahead of the curve developing virtual reality apps today. New developer tools are poised to make it cheaper, quicker and easier to develop VR apps, transforming the tech cycle. With our breakthrough VR app prototyping library, developers can approach VR in the same way they approach other forms of mobile development for the first time. Your team can rapidly build and experiment with prototypes and try them out on multiple platforms using their standard workflow.

This presents fantastic opportunities — particularly for smaller scale projects designed to appeal to a mass market audience. There’s a growing list of AAA VR games either released or in development, but for other use cases, there’s much less available. There haven’t been any legendary casual gaming apps or utilities that have taken off. And outside of gaming and education, the market is extremely wide.

And what about practical apps? What entrepreneur is going to make VR essential for scheduling appointments or organizing your office? Who’s going to make exercise more engaging, or help athletes train more effectively? What about music and art? Are there new opportunities to serve creative users?

Don’t get us wrong — there’s been virtual reality experimentation in all of these areas. But the most successful entrepreneurs are rarely the first to try something — they’re the ones who iron out the kinks, perfect the design and figure out the right combination of functionality, style and UX to bring it to a mass audience. 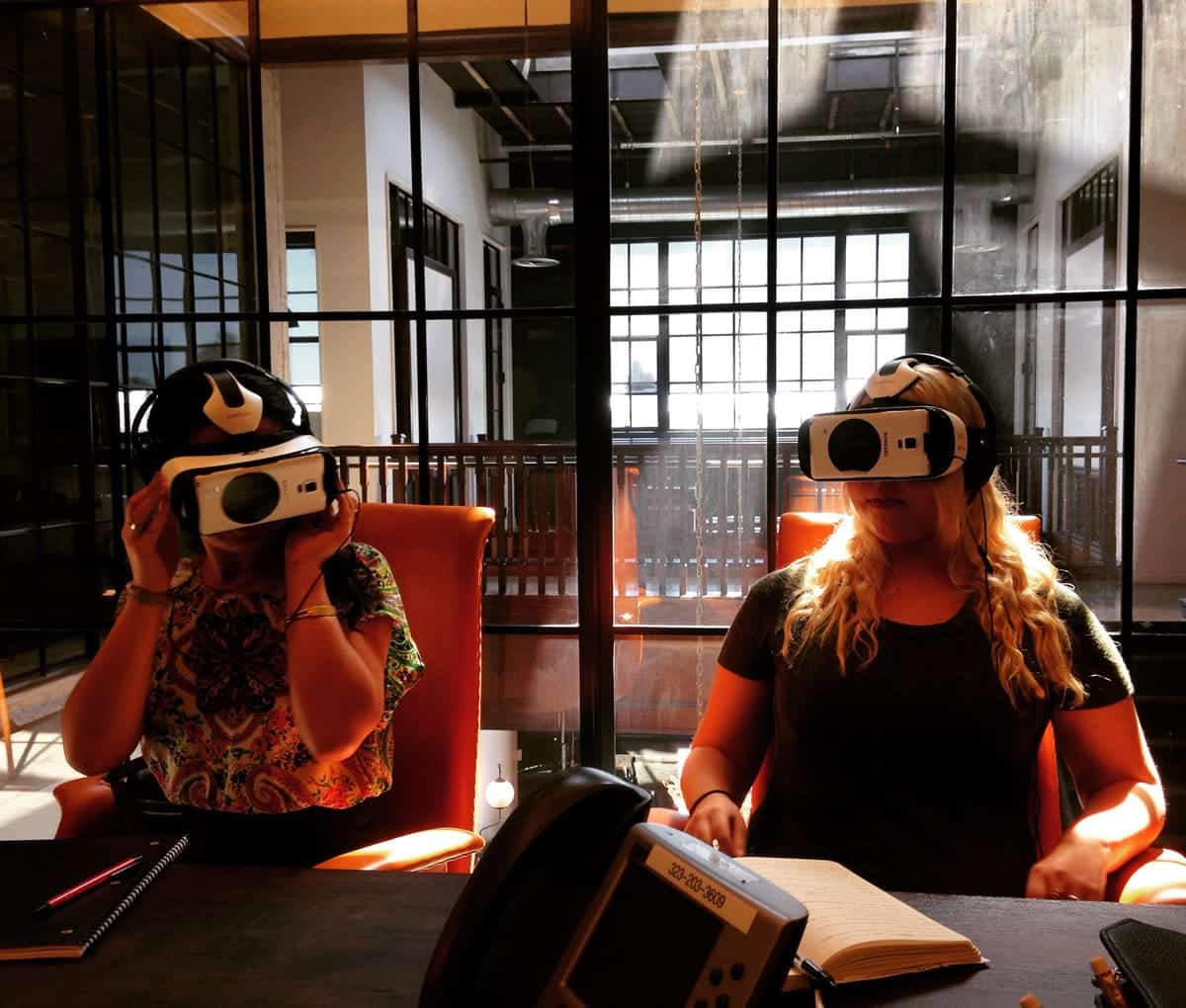 There are use cases where it makes sense to go all in on VR, but for most projects that’s not the best choice. By creating apps that support both VR and traditional interfaces, you’ll be able to grow a large audience, and even make the app more useful for your VR users. When your users are away from home they typically can’t strap on a virtual reality headset, but they might still enjoy using your app. Give them the option, while touting your VR features to encourage adoption.

Test Your Virtual Reality Apps Thoroughly on All Supported Devices

Mobile app testing is important for a lot of reasons, but they all boil down to one thing: your users will not accept a broken app. Your users have a lot of choices, and if your app is glitchy, slow, poorly designed or unintuitive, they’ll choose a competitor’s app that isn’t.

But for virtual reality apps, thorough testing is even more important because of the nature of the technology. The current generation of VR is still pretty new. Your team’s intuitions about good design and UX might not apply to VR. And while a poorly designed conventional app might frustrate users, a poorly designed virtual one could hurt their eyes, stress them out and make them feel dizzy or nauseous.

Bringing in new users is key to VR entrepreneurs in a way it isn’t with conventional apps. While mobile apps are widely used because they’re seen as essential, most consumers still view VR as a novelty — because for them it still is. The businesses that can make VR an important part of everyday life are the ones who will shape its future.

Already, there are some impressive, practical VR applications — particularly in education and training. Virtual reality apps are being built to teach everyone from elementary students, to doctors, to nuclear technicians.

In many cases, these apps have major advantages that may make them indispensable. For example, if VR training for doctors becomes good enough, it’s likely medical schools will adapt it, because it will help them train doctors more effectively. It won’t replace interacting with actual patients while in residency or dissecting cadavers, but it could become a standard addition to those aspects of medical training.

Similarly, VR is being used to treat PTSD by putting sufferers in an environment that simulates their triggers, such as loud noises. This allows them to desensitize themselves to these triggers, in a safe environment where they can quickly escape if they have to. You can’t really provide the same combination of immersion and control without virtual reality apps — or at any rate, it’s much harder to do. If those apps prove effective enough, they’ll probably become a standard (and essential) part of treatment for PTSD and phobias.

We’re so early on in the life cycle of this new technology that it’s hard to tell what’s going to really take it to the next level — or if anything will. For an entrepreneur, such fertile ground is the best place to be. Likewise, virtual reality allows you to give users an experience that truly wows them.

After all, no matter how good your social media app is, it’ll never blow someone’s mind the same way transporting them to an entirely different world will. What world you decide to take them to, of course, is entirely up to you.

Got a great tip for virtual reality entrepreneurs? Let us know by tweeting us @Protoio!