Testing your Proto.io prototype with Userlytics

Building a successful product is a long journey and it takes time until it reaches a level where it can be presented to the world. Companies need to make sure that their product addresses specific target audience pain points and also meets business goals, all while ensuring a smooth user experience. One of the most effective ways to achieve this is through prototyping and user testing. The aim is to use user feedback to refine the prototype and iterate until all major objectives are met.

Proto.io is a powerful platform that meets all basic and advanced prototyping needs in every step of the product development process. In this article, we shed some light on different prototyping fidelities and types of user testing feedback. For the latter, we will focus on how Userlytics, a state of the art user testing platform, can help you test your Proto.io prototypes in the best possible way.

Following initial user research, some teams start with low fidelity prototypes to visualize multiple rough ideas, which are later developed further with user feedback. Low fidelity prototypes are intentionally sketchy, leave out a lot of details, and just focus on the main concept and user objective. They are fast to create and cheap to discard and recreate. Users and stakeholders who get to see and test these prototypes can tell that they are rough and lack completeness. This allows them to take a more exploratory stance and make more general comments on what they would expect from the product, how they imagine it, what would bring more value, etc.

Getting feedback at an early prototyping stage helps the design team understand whether the product addresses pain points it was intended for and brings value to potential users. So, essentially, it is the first validation stage. If the results are not encouraging, it’s easy to make modifications and test again. If results verify the prototype, then the design team can proceed with developing it further.

Wireframes come a step closer to resembling a more complete product, with some level of visual and interaction fidelity. Screens become a bit more explicit with more UI components. Interactions can be kept basic, like basic screen linking/transitions. User testing starts to become less general and focuses more on the screens users see in front of them and the tasks they were asked to perform while testing. The aim is for participants to imagine how the product could be improved to meet their particular needs.

Many teams stop at this stage. Once they’re confident that their wireframes prove that both business and user goals are largely met with the proposed solution, they continue with specifying the remaining details themselves and proceed to visual design, motion design, and development.

Teams that continue to high-fidelity, interactive, and fully animated prototypes are those who want to get user feedback even on high-level details: on visual design, interactions, micro-animations, transitions, sound effects, etc. These prototypes are so realistic, that sometimes user research participants think they’re using a real application. Evidently, making changes at a prototype level costs much less than making changes on a launched product. Having said this, building realistic prototypes is a task that’s quite skill and time-demanding.

Proto.io is a pioneering web-based prototyping platform that helps product teams, designers, developers, and entrepreneurs quickly create prototypes to validate their ideas. With Proto.io, you can build anything, from low-fidelity prototypes to wireframes and interactive, fully-animated, high-fidelity prototypes that feel real. No design or coding skills are required.

Proto.io users can build, preview, and share their prototypes on the web or via the Proto.io app. Proto.io boasts a huge library of UI components and templates that make rapid prototyping easy for everyone. At the same time, it offers unparalleled possibilities when it comes to animations and interactions. For those who wish to start from existing designs, it integrates with popular design tools like Sketch, Adobe XD, and Photoshop. Finally, Proto.io greatly values the significance of proper user testing and, therefore, offers options to test with the most advanced user testing platforms, such as Userlytics.

When user testing your prototypes, you can collect feedback in many forms:

Showing your prototype to friends, family, or even strangers may give some useful insights. However, there’s no doubt that feedback coming from the product’s potential users themselves is the most important: you validate your idea with greater confidence, identify more substantial problems and make sure your solution meets its objectives.

The most complete user testing platforms include participant recruitment (using a combination of both predefined demographic filters, as well as customizable screening questions), professional services for designing and implementing the user experience tests, as well as advanced software for recording participants as they interact with the prototypes, carry out tasks and respond to questions. They also collect a set of quantitative and qualitative data, such as time spent on task, success/failure rates, System Usability Scale (SUS), and allow for information architecture optimization, such as card sorting and tree testing exercises.

Userlytics is a powerful user testing platform that captures both qualitative and quantitative data of the interactions of your defined persona, as they explore your prototype remotely. The user can leverage Userlytics’ worldwide panel of almost 750,000 respondents, provide their own participants, or use a combination of both.

A variety of features allows for the recording of picture-in-pìcture views (participant webcam + screen recording + audio), as well as quantitative and survey data. In addition, advanced information architecture optimization tools, such as card sorting and tree testing are integrated into the audiovisual recordings, such that you don’t just learn what participants did but, essentially, why they did what they did.

User experience tests in Userlytics can be conducted either in an unmoderated fashion (participants conduct the tests on their own, following a set of predefined tasks and questions) as well as though moderated tests (“Live Conversations”) where a moderator probes participant motivations and actions, as they interact with the prototype.

Unmoderated tests are best when you want to scale the level of testing, as you can quickly generate data from 10, 20, or even hundreds of sessions. Moderated usability and user experience tests are best used for in-depth probing and exploratory sessions, and learning the “Unknown unknowns”. A combination of both approaches is optimal.

Here are the steps you need to follow to test your Proto.io prototype of any fidelity: 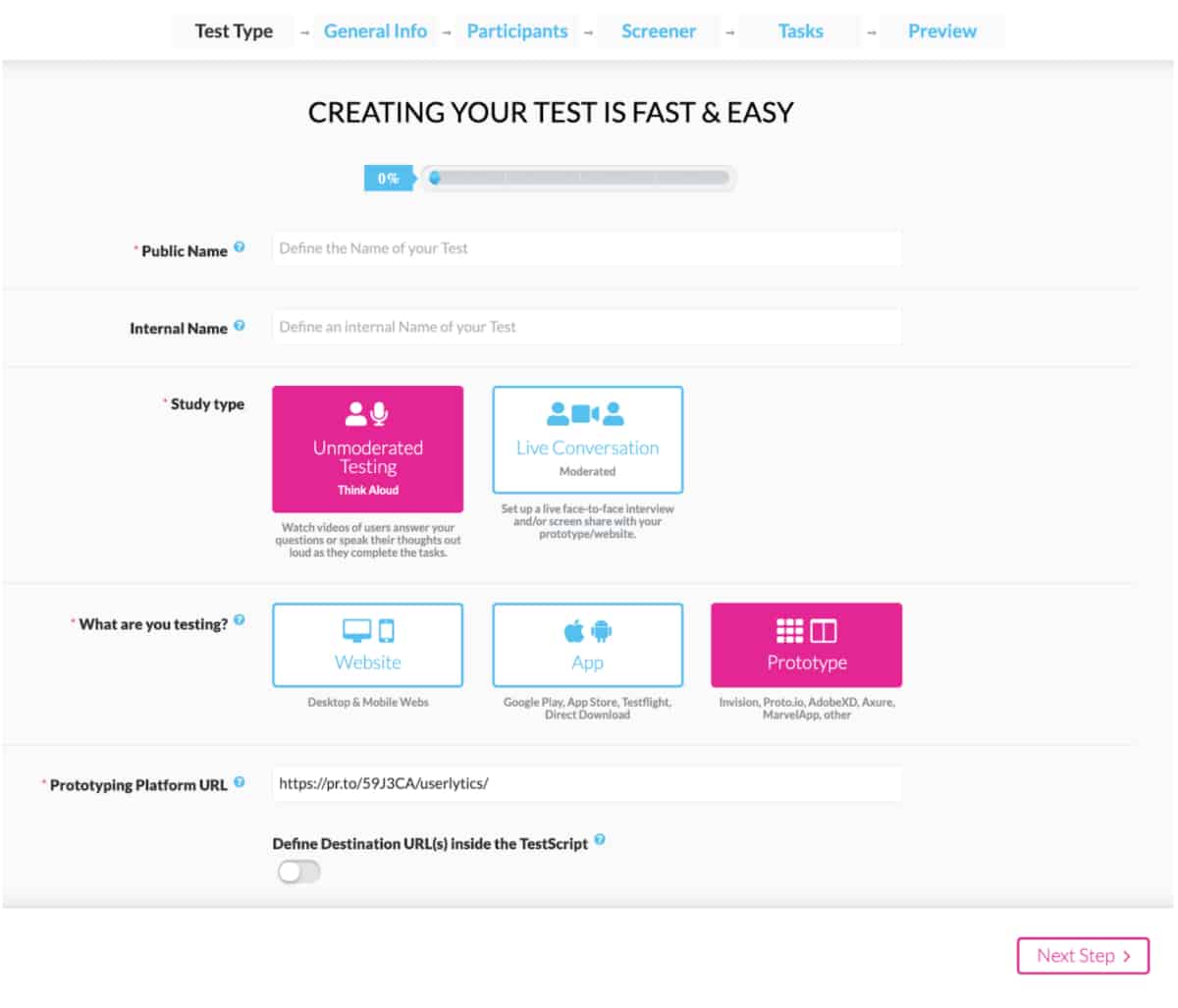 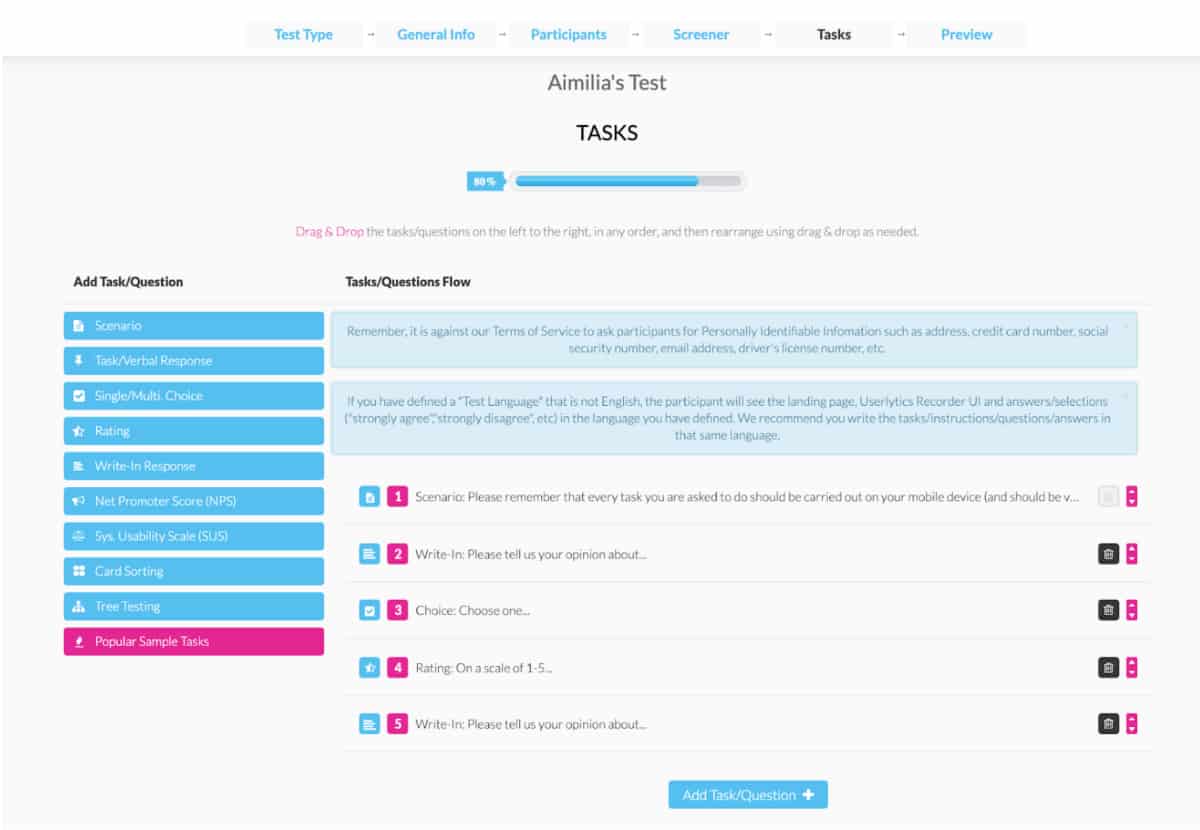 Remember that Userlytics’ research consultants are available to assist you at any stage of your testing process.

Here are some general tips for successful user testing:

Final Note: This article was co-authored by Anna Fuge Barrachina from Userlytics. On behalf of the Proto.io team, I want to thank the Userlytics team for their continuous support in building a strong collaboration together.